I do not know why we spent more time visiting with friends in their SL homes than we seem to do now. Perhaps its because we were still learning from each other . . . when I look at my friends list I see that most of them came “in world” about the same time I did. Perhaps it was because some had not yet made a Second Life home and needed a nice place to “hang out.”  We certainly enjoyed talking and sharing the funny things that happened to us.

One of the most amazing days I ever had began on Capitol Hill North . . . this was a sim that had our nation’s Capitol building, and people could go into the Senate Chamber and make a speech.  I had been asked by a friend to come to hear him speak. 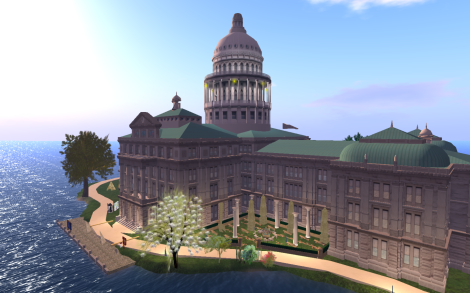 This is actually the Texas Capitol in Second Life. The U.S. Capitol no longer exists here, but like this, it was an extraordinary build.

At that time I was still wearing my original white linen dress and while I was sitting with a group, my dress just vanished — so suddenly I was sitting in the Senate stark naked!

I sat trying to find the dress in my inventory, when an officer in uniform came over and said, “Lady, you are under arrest!”

Well, of course that sent me into complete “panic mode,” and then I really could not find it.

He then said, “You must come with me. You are not allowed to sit like that here!”  All I could do was follow Officer Parks to one of the offices in the building where I then calmed down enough to find my clothes.  The officer then said that I should pay a fine, but that he would not “ticket me if I would go out dancing with him that evening.”   So I agreed to meet him at Bogarts at 6:00.

As it turned out, he was not an official officer, but he had fun getting dates there because that spot in the  building often caused garments to vanish.  We stayed friends, and he would sometimes send an IM to ask if I had been running around SL naked again.

I want to remind everyone of how often we crashed . . . it was just the way things were in SL!   Linden Lab was not prepared for the surge of growth that occurred from 2007.  People were pouring in daily and needed a place to live “in World,” the the Linden servers were frequently overwhelmed.

On another occasion a friend, who lives in Paris sent me an urgent plea for help.

Poet was the eighth friend I ever made in SL, so I needed to try to find someone to help him. His avatar was being held against his will in a dungeon! He could not teleport out, and even when he logged out and returned — that’s where he was.  I looked to see who was online that might be able to help Poet escape.

Ken Messmer to the rescue!   Ken came to my house and began to try to free the prisoner. You see, Poet had given permission to a “lady of the night” and now he was “hers.”  Ken did finally figure a way “break the spell” to get him to my home. I do not think Poet ever felt safe again in SL unless he was visiting with me.

Not long after, I got things set at my house friends began to say that I needed to open a shop to have a place away from my home to help people locate the fine antiques and art that I had collected and placed so beautifully in my house.  I had not come to SL with the intention of setting up a business, but I thought it might be fun and bring in some Linden.

And so I began making money designing gardens and interiors in Second Life. 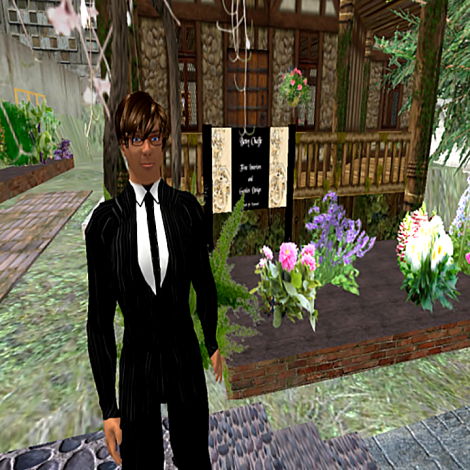 Zeb standing in front of my shop.