From the comments following my first post, I understand people are interested in hearing about Second Life as it was in 2007. I have also been asked why I stayed in-world. So let’s talk about:

When you are in SL you must always try to remember that the Avatar you are communicating with is a real person and their feelings  are as fragile in SL as they are in real life (RL). First and foremost, I stayed in Second Life because of the wonderful people I was meeting and gradually getting to know.  After more than 8 years in this virtual world, I have many friends who live in various places all over the real world.

Having coffee with my daughter on the new island . . . and talking about SL relationships.

I find it curious that I do not seem to remember exactly how I met most of my friends . . . sometimes they might see me out shopping or dancing with a friend at Bogart’s or Frank’s or Avillion .  .  . and ask if we might meet some other time.  Friendships in SL usually grow over a period of time just as they do in RL. But sometimes you know instantly that you are running on the same wave length.

Usually it is the shared SL experiences that bind you together, and the friendship grows and strengthens. People do fall deeply in love in this virtual world, just as they do in real life.  Many get married in Second Life. I have had many wonderful romantic times in SL, but only two long-time partnerships that developed over a period of time. 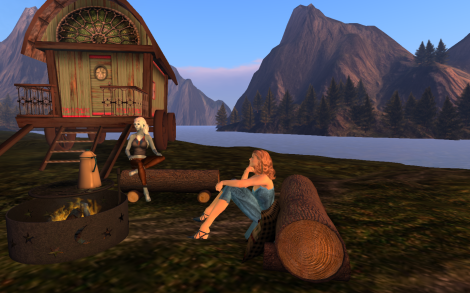 The camp on the new island as the sun comes up. You see, the thing about Second Life, is that shared experiences and conversations — they are real. So here with my daughter at the campfire, while she is having coffee before work in another city . . . these shared experiences are special.

Certainly I have met many people in SL who did not become friends . . .  some were searching for things that did not interest me. I did not want to be a vampire, I did not want to live in bondage. “Waging war” or “becoming a countess”  were not what I came to SL to do.

So what did I want?  I quickly realized that since I was such a visual person, I needed to maintain a sense of myself, really fight to maintain an aesthetic that was “just me!”  Let me tell you that when I was living and working at Bogart’s, most of the women who came there to dance were wearing huge mushroom-shaped evening gowns that “swallowed up” the man they were dancing with.  Those gowns were awkward — supposed to be very glamorous, but they were absolutely rigid.  I thought they were ugly, and the men I danced with hated to dance with women dressed that way.

Surely there were pretty things out there . . . so I set out to find “The Best of Everything” that SL had to offer!  That meant keeping my eyes and ears open.  I will never forget the day I first saw this beautifully detailed gown on a lady who was sitting across from me on a meditation cushion in “The Lost Gardens of Apollo.”  I did not know her but I was brave enough by then to ask where she had found it, and she said Nonna Hedges.  So I found the store and quickly became a good customer.

Although I was never tempted to learn how to build anything, I have had the opportunity to meet many of the designers who have graced SL with fine art, wonderful antiques, beautiful homes, castles, and gardens.

Many of those who created the finest couture SL had to offer have also become friends. I have enjoyed watching them create things, and then enjoyed wearing the beautiful results.  The biggest change to fashion in Second Life in the last three years has been the advent of “rigged mesh” clothing. The early mesh clothing was really awful: inflexible and ill-fitting. It will be interesting to see what mesh clothes look like in SL two or three more years from now.

Over the years, the quality of the visuals in Second Life have improved greatly. With those advances, the sophistication of design — skin, hair, and clothing advanced in a similar way. 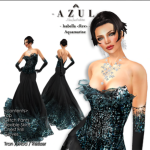 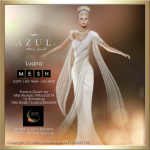 Read more of Betsy Chaffe’s Second Life Memoir. Now 74 in real life, Betsy has been part of SL for more than eight years.