When I first went into Second Life, Francesca was out of town so I was  totally on my own.

Second Life has its own currency called Linden Dollars. To buy things you must either purchase Linden from Second Life, or make Linden in-world, which can be done many different ways. The exchange rate is roughly 250 Linden to the US dollar.

The next time Zeb came to Bogart’s I told him about the Linden I had earned from dancing. Along with the fact that I had been earning money dancing with men. Without knowing it. He said what I had already felt . . .”Betsy, we have to get you a place to live.”

I had met a lot of nice men, but I had made one very good “lady friend,” and I turned to her to ask for help in finding a suitable place to live. Her name was Sara, and while she had not been in SL much longer than I had, she did have a very good friend who was building houses and spending a lot of time in-world.  She asked him to help me . . . and so began a long, on-going friendship with Badger.

I met with Badger and explained that I needed  something  very simple but safe.  When I say “safe,” that may need a little explanation. I wanted a peaceful sim, but also you see, I wanted security. People can materialize anywhere in-world — so imagine how it would feel to find a stranger when you teleport home. It is as disquieting in Second Life as it is here!

Badger said that he would be happy to help.  So after a few more nights in the hammock on the Beach at Bogart’s, I had a home of my own on Caribbanna Beach!   I had ocean,  a lovely garden,  and a simple, white brick house, with a security system to prevent uninvited guests.

As it turned out,  Badger  was a neighbor there and has continued to be a very good friend through all of my SL . . . but there will be more to tell about Caribbanna Beach as the story progresses. Let’s simply say for now that I always kept a home there even though I owned many other homes and houses on  other sims as time went by.   Many of my longtime friends will remember that house and the Tuscan Villa that followed.  At this time in my Second Life, I had a nice place to live.  It was going to be perfect!

About the time Badger finished my house, Francesca came back from her holiday.  She took me shopping for a better body, nice skin and becoming hair. Default avatars are really not attractive, so artists in Second Life make and sell skin and bodies to customize the way one’s avatar looks. The body is the skeletal structure of the avatar, controlling everything from facial structure to height and breast size. I told her that I did not want to look like a Barbie Doll running around on my tiptoes :-), so she helped me improve but stay “me” in the process.

At my home in Caribanna Beach

I think at this juncture I should  talk more about this virtual world we call Second Life. As with our own world, there is good and there is evil . . . and as with real life there are dreamers and schemers. Some people come here to immerse themselves in various role play venues. 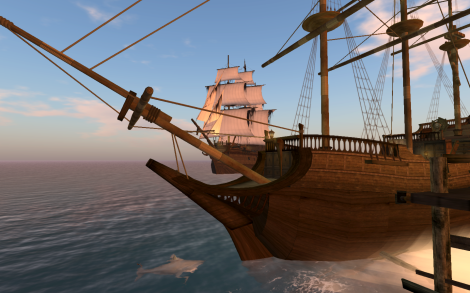 Where else but SL can you live as a mermaid or merman in a house under the sea, become a butterfly or elf and live in a tree, or learn to sail a tall ship and become  a real pirate?  Basically, if you can dream it, in Second Life you can try it!

My Second Life story began with this first post.

One response to “Betsy Chaffe: Home in Second Life”