Are you asking me whether there is sex in Second Life? She dropped her voice. “Well, yes . . .”

Alright, people. Can we talk? We’re human, and it’s a major interest, although you may be interested to know that sex words are not THE most searched words on Google. But they are up there (Seattle Organic SEO Most searched terms).

Yes, there is sex in SL.

Let me give you my take on this with an analogy.

I grew up in New Orleans and lived in the city for many years. I often had friends from other places say to me, “I LOVE New Orleans. We had such a wild time in the Quarter; it was great.” Then that person would say, “Oh, but I couldn’t LIVE there.”

Yes. Because we obviously go to Bourbon Street nightly and get drunk off our asses on Hurricanes. Why, just yesterday I stepped over Bob, who was lying in the gutter on St. Peter’s Street. I slapped it his face a few times. “Bob. Hey Bob.” He opened his eyes a slit. “Don’t be too late to the office this morning. We have a meeting.” That’s just how we roll in New Orleans. Obviously.

You want to just smack their forehead with the flat of your palm.

I love the fact that Second Life has everything. In fact the way I describe it is this — it has all of the best aspects of humanity along with many of the worst. And please don’t get me wrong. I do not mean sex is one of the worst aspects of humanity. I love it dearly. I also want to say that sex in SL can be pretty wonderful. Oddly, very much like it can be here.What I am trying to say, is that you can find all of the more common, cheap and sleazy aspects of sex in Second Life. If you want to go on a tour of them, you have to be age verified; those places are restricted to Adult regions.

Just like on the internet and any city I’ve been in anywhere in the world, the risque is there if you go looking for it. In the Second Life search engine there are toggles for the level of content you want to look at: General, Moderate or Adult.

The reason this topic comes up with those of us who love Second Life, is if an internet “journalist” wants to go into SL and tour the sex businesses, and he/she only wants to write about that, then they can certainly post some pretty racy stuff. Kind of like you could if you wanted to write an article about the Internet and only chose to use sex search terms. Or if you wrote about New Orleans, but only went to the strip clubs and hired hookers. Jo Yardley writes well about such an incident, and then a more positive article that the same “magazine” published.

So, I’m headed into SL to meet my Mom. Yes, my 72 year old mother is in Second Life and has been almost has long as I have. We’re talking about buying a region. Still discussing what we’ll do with it . . . we are thinking a dance place on a small corner — though we are arguing about whether to do jazz or Indy rock. Maybe it will be a venue with changing music . . . I think I like that. A big portion of the island will be for changing exhibitions — sometimes art, sometimes — I don’t know yet. Big smile. Isn’t that what being creative is all about? This is what I love about Second Life. Just like in real life, it’s what we go make of it each day. 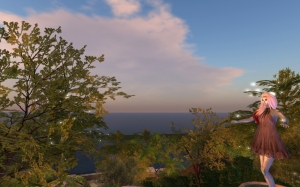 The Life of a Safari Guide

Stories from the Heart of the South African Bushveld.

Living a Healthy and Vibrant Life After 50

Writer, Traveler, and Cancer Survivor -- Get Out There and Live Life!

Get your lens on

My world through my camera .... Letting the Light in ... one Frame at a Time ... while I practise mindfulness and being in the moment as often as I can, I am never the less inclined to record so much of what I see on a day to day basis. I find solace behind the lens, it brings me joy to create beautiful images and fulfilment to record something that just needs to be told. I feel as if my camera at times is just an extension of myself and it will find an image in what may be the tiniest little part of the day or the world around me . Living with depression for much of my life I have been able to use it as a tool to refocus ( pardon the pun)

My Name is not Crazy Person.

A girl with a camera looking for birds

All my creative pursuits.

Combing Through the Pages

of Books, Family, Fostering, and Faith

(The Second Life World is a trademark of Linden Research, Inc.)