“The Caterpillar and Alice looked at each other for some time in silence: at last the Caterpillar took the hookah out of its mouth, and addressed her in a languid, sleepy voice.

‘Who are YOU?’ said the Caterpillar.

This was not an encouraging opening for a conversation. Alice replied, rather shyly, ‘I — I hardly know, sir, just at present — at least I know who I WAS when I got up this morning, but I think I must have been changed several times since then.’

‘What do you mean by that?’ said the Caterpillar sternly. ‘Explain yourself!’

‘I can’t explain myself, I’m afraid, sir’ said Alice, ‘because I’m not myself, you see.’

‘I don’t see,’ said the Caterpillar.”

I fell asleep this afternoon on a pile of articles on the Metaverse, avatars, and virtual reality . . . reading and thinking, my eyes were so heavy the tea did nothing to keep me here, and I drifted. I woke up with the sun low on the horizon, the afternoon gone. I make sense of things by reading, researching, exploring, writing and making things. It’s the way I came into Second Life – a paper for grad school about new technologies and their implication for education. I fell down the rabbit hole then, and I was amazed, I was charmed. It was something I had to be a part of because I knew it was the beginning of something big. I lost a marriage to this virtual world. “Really,” says you. “Yes,” says I, “but that’s another story. What I wants to talk about next is avatars.” 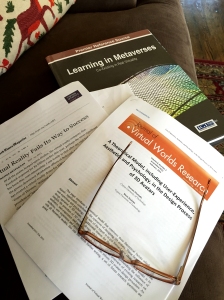 In 1984, Lucasfilm’s Habitat (for Commodore 64) was the first virtual world to use the word “avatar” for virtual inhabitants. It is a Sanskrit word meaning the manifestation of a deity on earth, in either human or animal form. And so it has also come to mean the representation of a human in all types of computer generated spaces. I’m sure it has to do with my age, and my love of the world that George Lucas made for us with Star Wars, but I find a sense of the symmetry in thinking that his company selected this rich word to call people in cyberspace.

Human machine communication or human machine interaction is a vast topic, and the avatar is part of this. Avatars have multiple functions within metaverse worlds — they are a representation of the human, they are a means of interacting with the 3D virtual space, and they are the way we sense the space we occupy. Over multiple posts (probably interspersed among other topics), I plan to explore different aspects of what avatars are and what they mean to us. “Who am I” and “who are you,” are infinitely interesting questions to us as humans . . . and intimately related to the discussion of Avatar.

An aside: as part of my reading the last two days, I found a great paper on Habitat that discusses all of the lessons learned on the creation of that world. The paper was presented at The First International Conference on Cyberspace held in May 1990 at the University of Texas at Austin, and later published in “Cyberspace: First Steps.” I wanted to share it because I found many of the observations continue to have real meaning today.