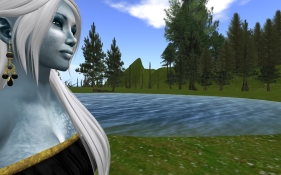 In 2007, I stepped through the looking glass into the metaverse.

Second Life® was not then and is not now a perfect iteration of what we hoped the virtual world would be, or will be. Yet it has been an extraordinary experience.

Over the eight years, I’ve been in and out of the world. I’ve run a sim, learned to terraform, run a fantasy hotel, built houses, made clothes and participated in various role-play sims. It has been a hobby that I have returned to time and again to experiment with and to try new things. I’ve met people from all over the world. Three have become real world friends.

On one absence, I read an online article about the dwindling number of users in Second Life. I went to sleep that evening worried that I might lose my metaverse, and that night I dreamt of flying over a beautiful world under a WindLight sky. I was back in-world the next day.

I have been away for eighteen months, but we are now nearing the end of the current version of Second Life. I am back now to see the death of this version of the world and witness the birth of the new.

Many current users in SL worry about the move to the new platform. With no backward compatibility, we must start fresh in the brave new world. Losing inventories is no small thing. I think about losing the houses I’ve built, the houses I’ve bought. My trees and plants. My skins. My clothes. My dragon. It’s enough to make a grown avatar cry.

This pales though in comparison to my excitement about where we may be going next. Whether it is in Second Life, or in High Fidelity (Philip Rosedale’s next world), or a in a world made by a yet unknown player . . . I am ready to contribute to our growing understanding of what the metaverse may be, and what it may become.

I am here to reflect on my experiences in Second Life. To take pictures of the wonderful and amazing things the residents have made. To make a scrapbook of things we don’t want to forget as we see this world end. And to look forward to the next one.

4 responses to “Eight Years in a Virtual World”